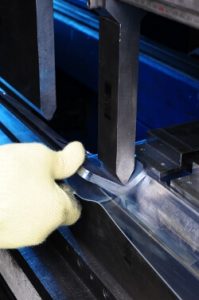 The function of this film is fairly simple. The film with a width of 100 / 150 / 200 mm ( other width can be delivered too ) will be laid on the side which has to be protected ( either on the bottom tool or up on the sheet ).

For fixing the film on the machine most customers use magnets.  Bending films of the type STAR Premium AF are quality films made of a highly resistent PU and were developed and tested by leading suppliers of the bending industry. ( Our film was the winner compared to cheap PVC film and highly expensive textiles). The quality of STAR’s bending film is due to it’s high tear resistance and long life even with many bends on the same space. Bending tools will be protected, you won’t need to rework.

DO YOU HAVE ANY REQUESTS?

If you need further information, we would be pleased to offer you an individual consulting.